Le Palaie: the story of a family and a magic place

Le Palaie: the story of a family and a magic place

We would like to tell you the story of one man’s dream.
It was a dream made possible by perseverance, tenacity and the ability of a young captain of industry who went in search of an unspoilt place in which to bring out the finest and deepest part of himself.
Nino Angelo Capponi’s destiny had already been written. He was the son of farmers and graduated at the age of 24 in Economics, before starting to work in the logistics company of the Gori family in Livorno. Young Nino threw all his enthusiasm and the insights acquired from his studies into his work, partly thanks to his hard-work Gori became a world leader in specialist and refrigerated transportation by sea, concentrating on wines and strengthening its position in Italian, French German and Spanish ports while also expanding into India, Australia, the Far East and South America.
For Nino however, this was not enough, so he went in search of paradise, for himself, his family and friends.

Le Palaie: and then there was paradise

With the company going from strength to strength, Nino was in constant search for his own corner of unspoilt nature; a place where he could unearth his innermost self and delve into the depths of his heart.

Finally, he found it in 1996 in Alta Val d’Era, at the gates Peccioli, a small town with fewer than five thousand inhabitants, between the provinces of Pisa and Livorno. Here at Le Palaie, Nino Capponi, and his wife, his life-long companion, discovered paradise.
A place where the colours of the hillsides look like the brushstrokes of Impressionists, where the air has an enchanting scent and the biodiversity of plants and animals are undisturbed.
For Nino it was like a thunderclap.
Year after year his love for the place was fuelled by passion and creativity, first he bought the 17th century manor house, which has now become the beating heart of the agritourism, then started producing oil and wine.
In 2004 there was the first harvest and boundless joy; the wines were sold and appreciated internationally.
Today the founder, Nino, is no longer with us, he passed away at the age of 82 on 12th September 2020 but his love for his family, the land and passion for wine are still with us and above all so is his approach to life: believe in your dreams and carry on with a smile.
His two daughters, sons-in-law, daughter-in-law and seven grandchildren continue his legacy. The heart that Nino put into the estate and made the Val D’Era flower are still with us. 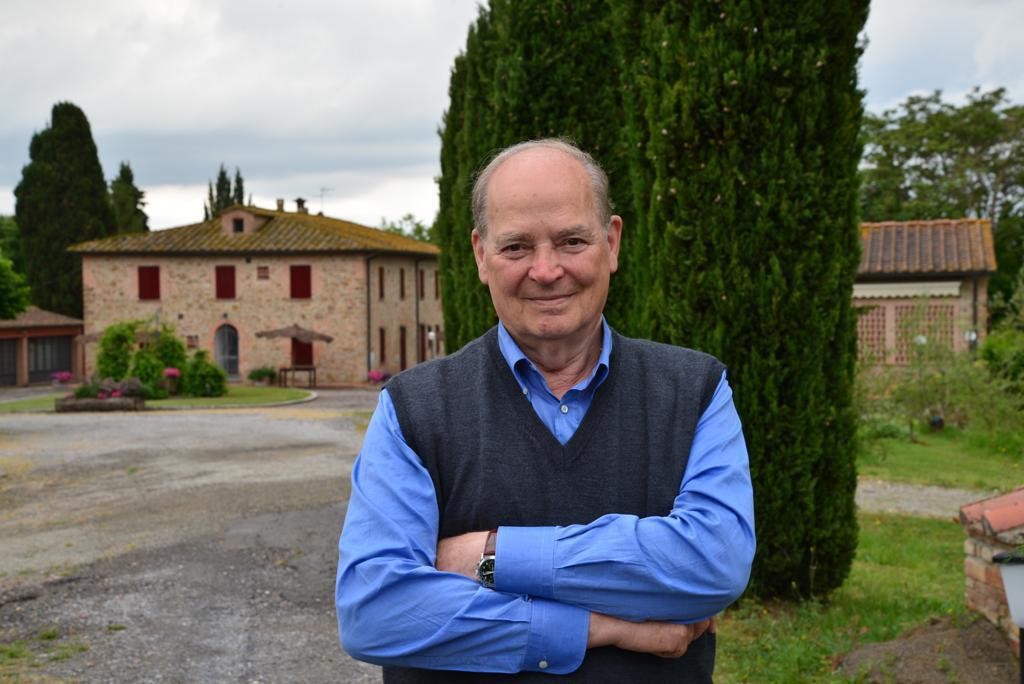 An estate immersed in nature

The name Le Palaie comes from the original estate as recorded in the land registry.
It covers 150 hectares of which 20 are inhabited and 19 have high-quality vineyards. There are an additional 3 hectares of arable land for the fauna and insect fauna to help preserve and repopulate the environment, and 20 hectares of poplar woods. Huge areas are given over to that typical Tuscan agriculture: olive groves.
This is the setting for the Agritourism, the cellar, the guest accommodation and areas for events and receptions.
In Le Palaie everyone can find their own corner of paradise, a place that will always be in their heart.